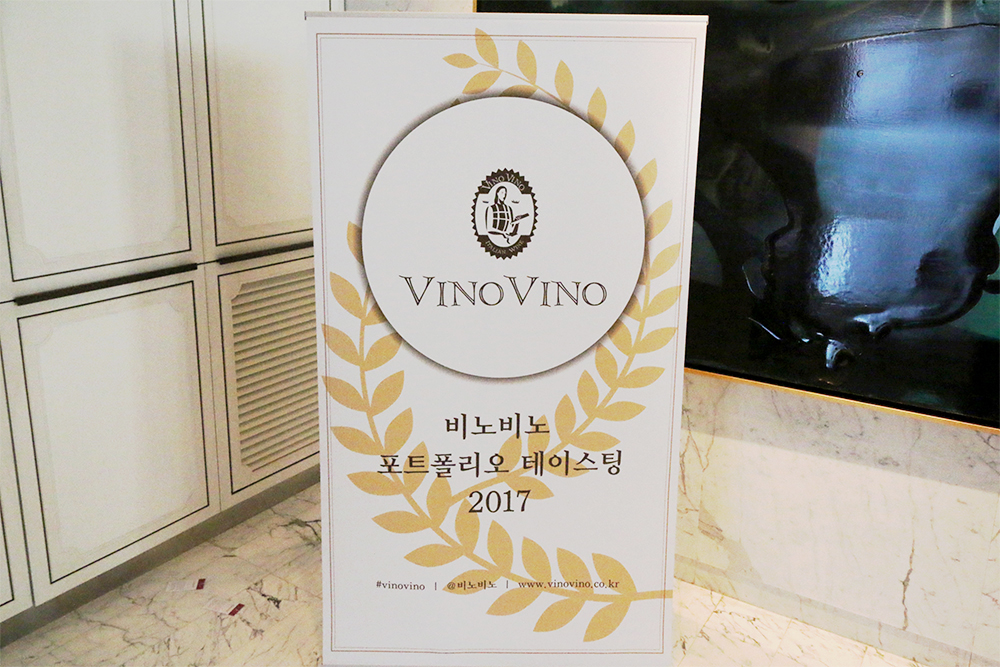 One of those moments that makes me proud to be a member of the Korean wine community, which, I must admit, comes with its challenges, is when I encounter Korean people, whether they be professionals or wine enthusiasts, or simply people “who just happened to drop by”, truly and genuinely enjoying wine. Where’s the surprise? you may ask, when enjoyment is built right in the very fabric of wine. Considering, however, how short the history of wine is in Korea and how difficult it has been for wine to seep into people’s everyday lives, it certainly can be a pleasant surprise.

(Koreans, who are early-adapters in general and in various other regards, accepting of and eager to soak in the newest global trends and foreign cultures, tend to be quite conservative, proud and protective when it comes to their own distinctive drinking culture and their signature, I would hardly be exaggerating when I say, ’national’ drink of choice, soju.)

One such proud moment took place recently, and I was lucky enough to be a part of it. Vinovino, a Korean wine importer, which, you can tell by its name, is one of very few Korean wine importers that has been concentrating exclusively on Italian wines, hosted a tasting for wine professionals and trade individuals at the Four Seasons Hotel in Seoul on a Thursday, February 2, 2017. The tasting showcased a big chunk of the wines in Vinovino’s portfolio: 55 wineries and 134 samples. 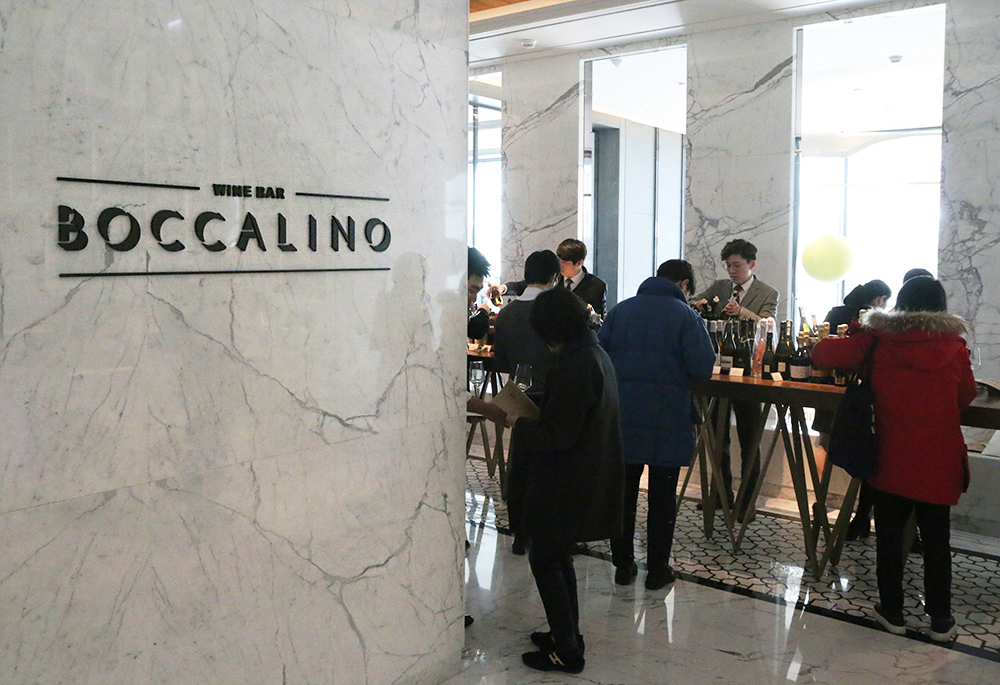 Just as you stepped in, the wonderfully rustic, fresh and crisp white wines from Italy greeted you.  Proseccos from the superior Conegliano-Valdobbiadene denomination and a delightfully dry rose Franciacorta getting your palate just right and salivating.  Friulanos with its unique vegetal notes and the sharp, poised Soaves and Gavi di Gavi.  Moving onto a wide range of red wines, from traditional Barolos and BDMs to modern interpretation IGTs like a Bolgheri single-varietal Merlot that’s surprisingly spicy and keeps you guessing what the grape might be.  The journey took you right around Italy and back to where you started where palate cleansers like a nicely aged Vin Santo from Chianti and Grappas for the spirit-lovers bid you farewell.

Some big names (with big price tags to match) made an appearance, stirring up the crowd, as well as more modestly priced easy-drinking everyday wines. Some of the guests Mashija interviewed gasped at the sheer number of samples available for tasting and were pleasantly surprised that at least some companies don’t feel the need to hold back when exposing their wines to the public. 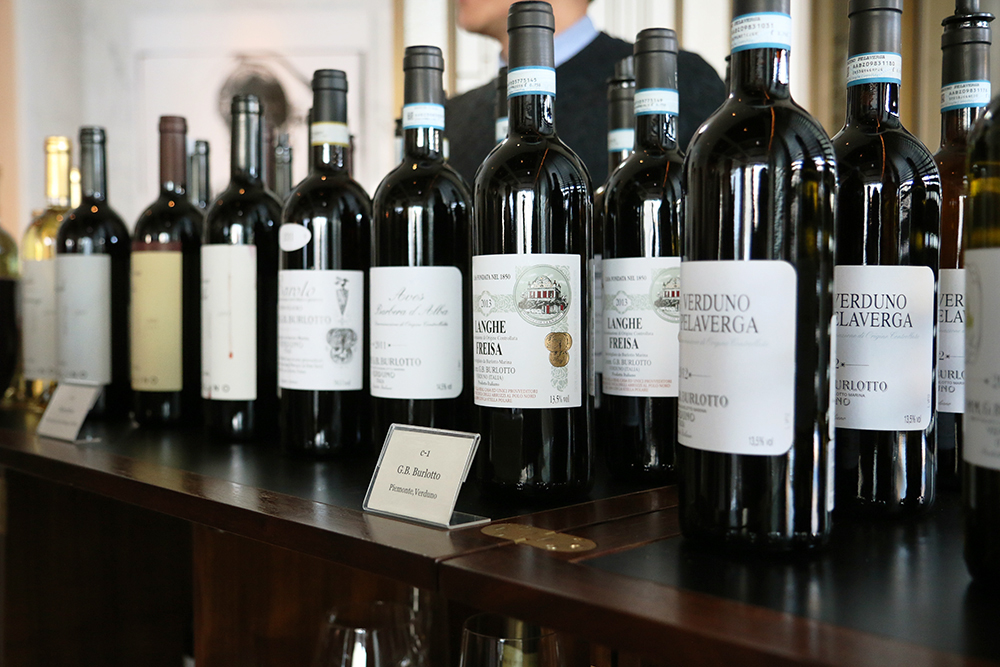 Here are some of the more high profile wines to make an appearance at the event: 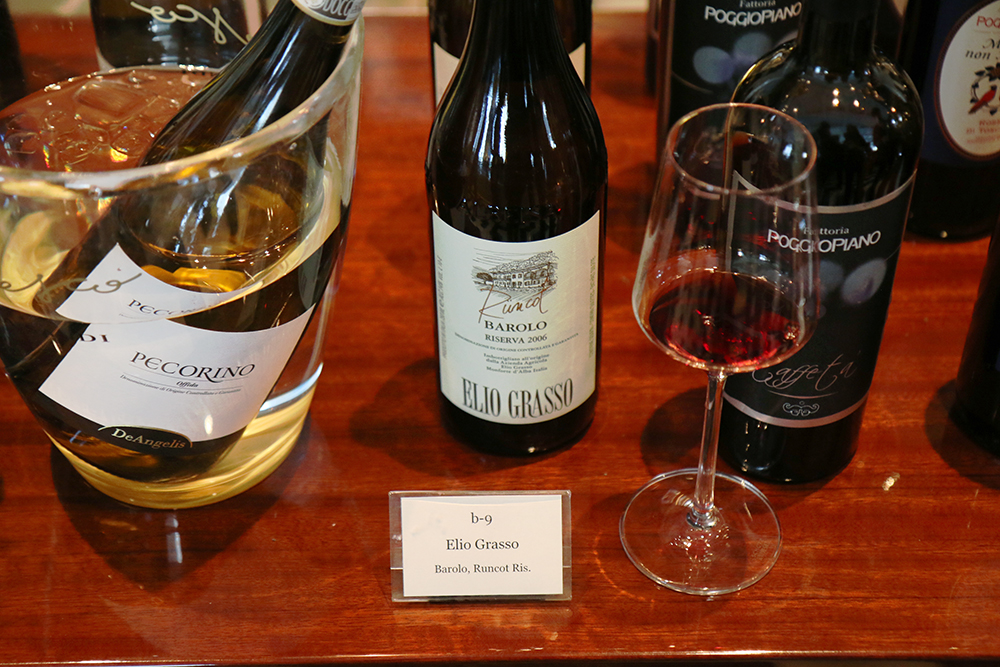 More impressive, yet, was the fact that quite a few of the wines weren’t new releases and had seen some aging in the bottle. You could detect amber hues in some of them, and the poached cherry, rose petal, leather, truffle notes on the nose that are so characteristic of some of the best Italian reds were enough to send you into a state of ethereal trance. Reminding us once again of the paramount importance of drinking wines at their best, not necessarily the best wines.

The star and scene-stealer of the show was unquestionably Voerzio’s Rocche dell’Annunziata. Considered one of the greatest Barolos from La Morra, the vineyard in the Rocche dell’Annunziata was first planted in 1952. Having reached cult wine status by many critics’ and wine lovers’ regard, the winery was introduced in influential wine critic Robert Parker’s ‘The World’s Greatest Wine Estates’. The winemaker is known for its rigorous, almost relentless pruning that leaves a mere 4 bunches per vine and ultra-concentrates the flavors and phenols in the grapes and wines. Just the right mixture of modern and traditional, Voerzio is careful not to stray from the traditional template, while applying rigorous and selective pruning and harvesting methods conducive to modern, ‘Parkeresque’ wines with concentrated flavors, a sticky-sweetened glycerol core, and a tannic grip that leaves your tongue gasping for air while still managing the overall balance and finesse that defines an elegant wine. 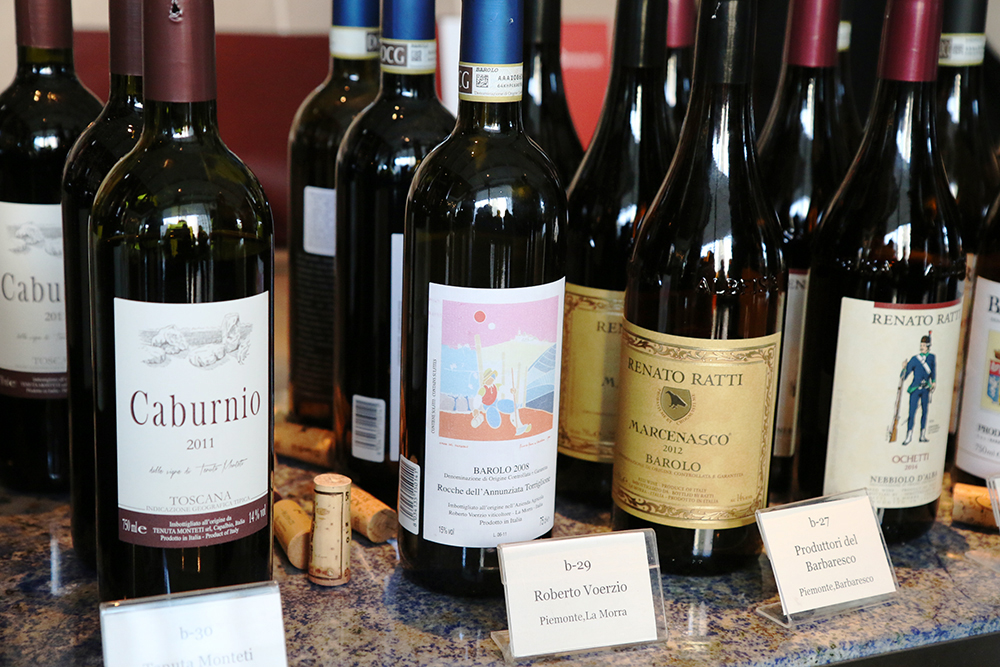 The tastefully chosen, and beautifully lit venue was also the center of attention and the subject of much chatter. The venue, a wine bar by the name Boccalino, was multi-leveled, multi-roomed, multi-stationed, and multi-seating available. The event was all about tasting, drinking, and socializing in small intimate groups without feeling the pressure to “move it along”. Water was replenished and the spittoons emptied in a timely manner. Aside from the slight traffic at the start of the event due to the inflow of so many people who had anticipated the event, the tasting was, on the whole, well managed. 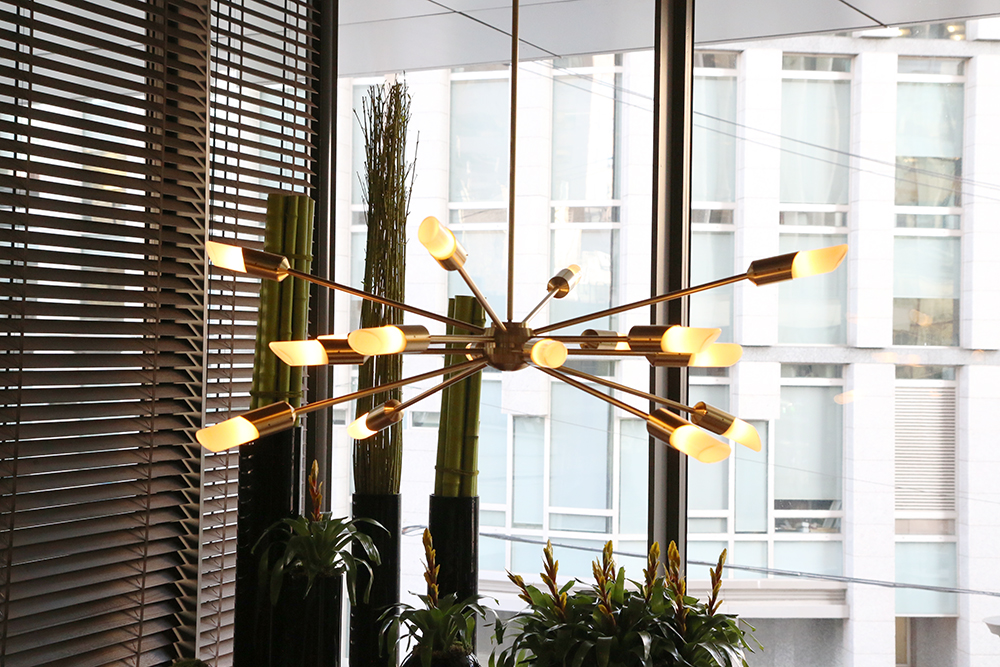 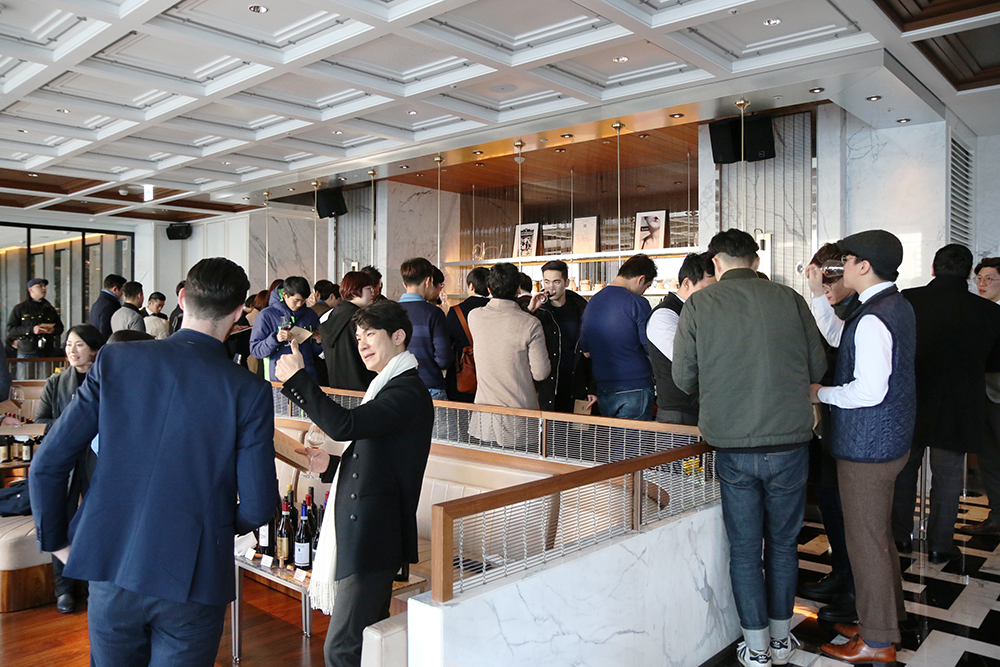 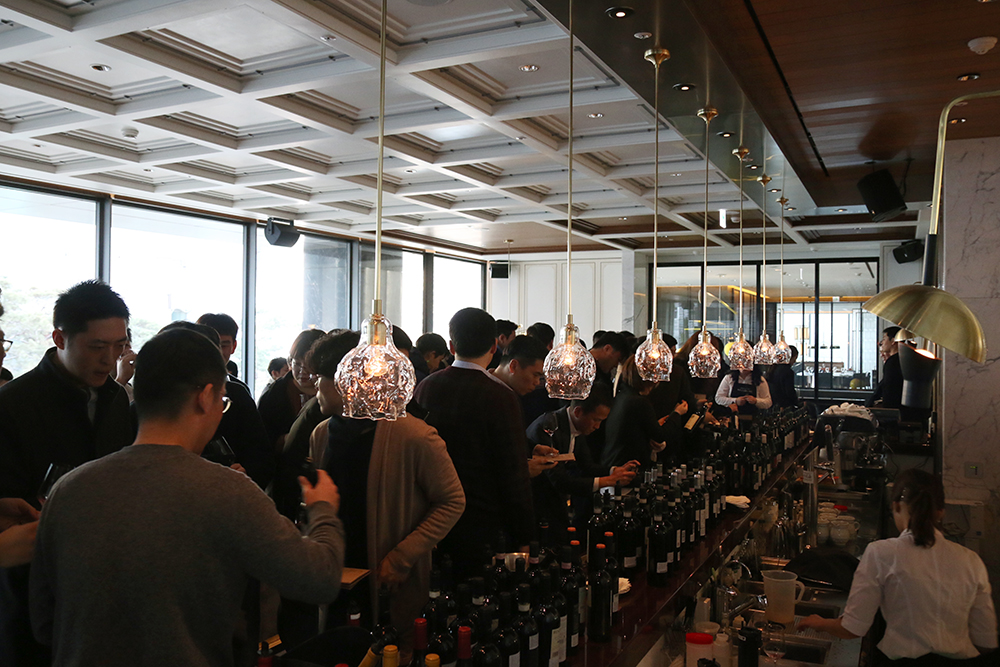 A separate room was reserved solely for natural wines, and the list wasn’t short in this room either. 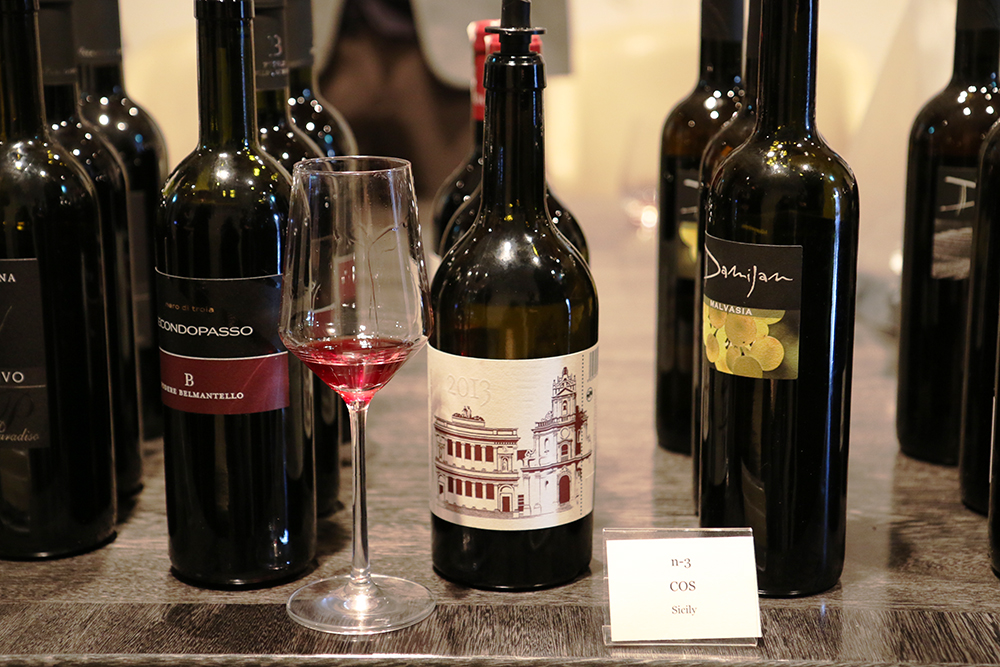 In midst of natural wines: COS, Cerasuolo di Vittoria, 2013 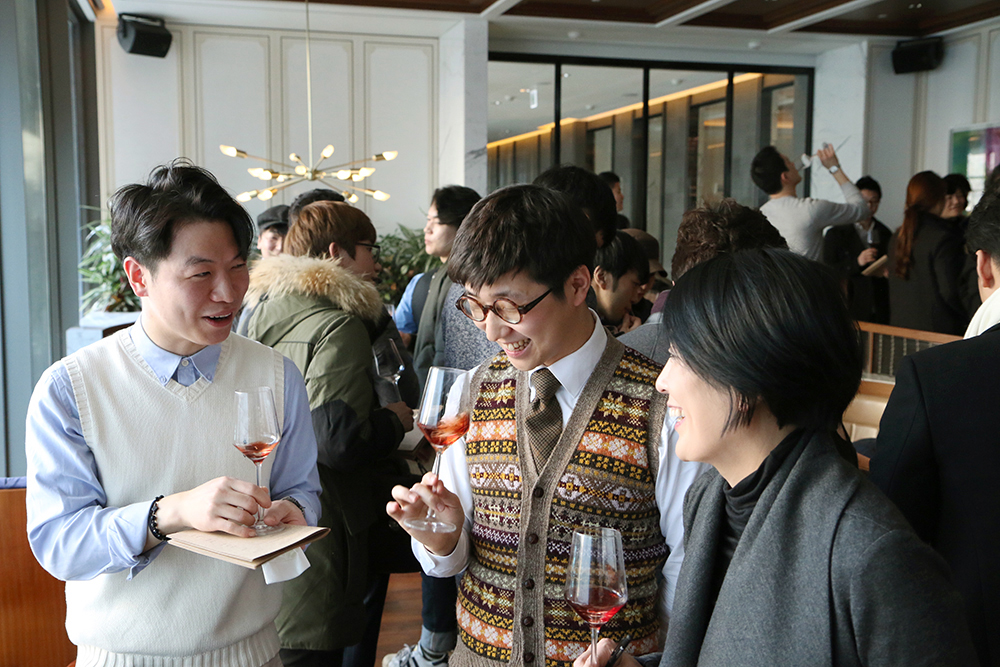 Moonsong Bang, Director of Winevision School conversing over a glass of red with sommeliers from Jung Sikdang, Michelin starred restaurant in Seoul

God made only water, but man made wine. 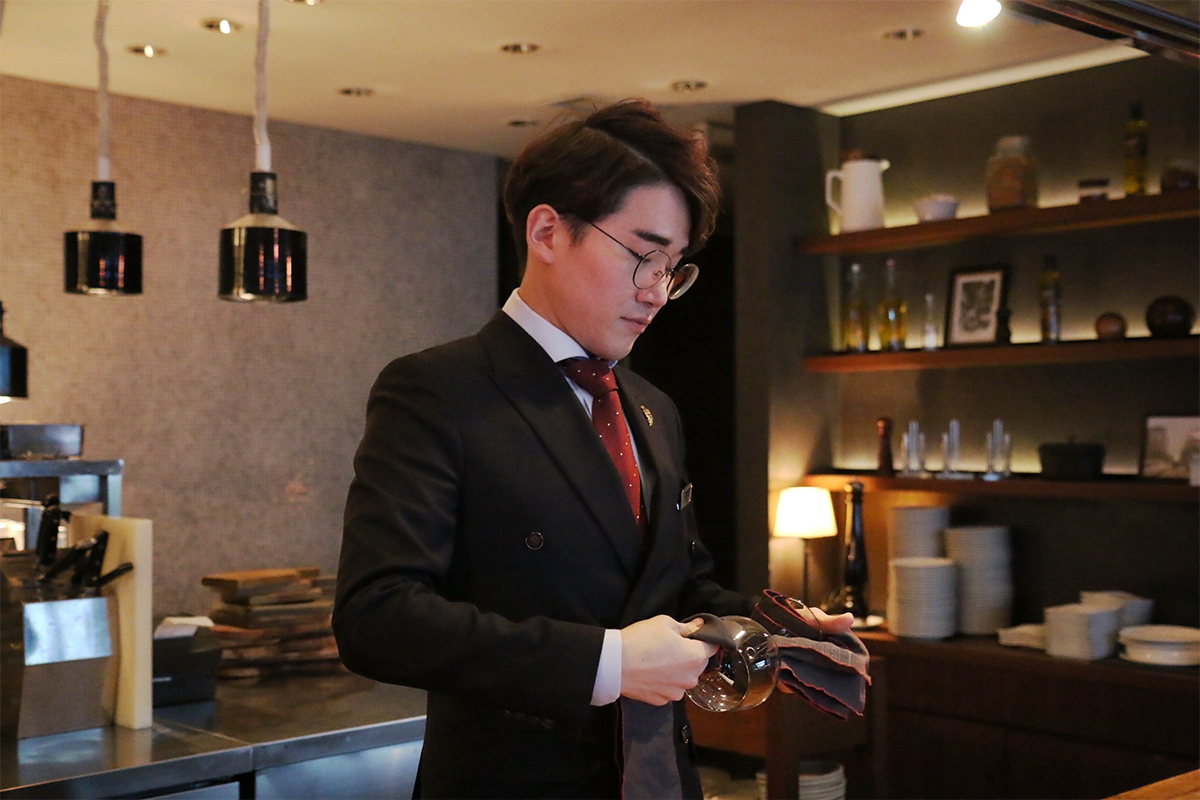